The connection between iodine and Hashimoto’s disease has been one of the most requested topics that I cover, so I’d like to present the research on this topic, so we can set the record straight. Please be aware that none of this is my opinion but rather a detailed analysis of what the scientific literature currently presents.

Your body has about 15 to 20 mg of iodine and 70 to 80% of it resides in the thyroid gland. Iodine is transported into the thyroid gland through the sodium-iodine symporter or NIS. The thyroid peroxidase enzyme oxidizes iodine which is then integrated into thyroglobulin resulting in the production of thyroxine (T4) and triiodothyronine (T3). Thyroid stimulating hormone (TSH) regulates this process.

Your thyroid only needs 150 to 250 micrograms a day of iodine to function properly. Once iodine intake exceeds this range, hypothyroidism and autoimmune thyroid disease may occur in some individuals. 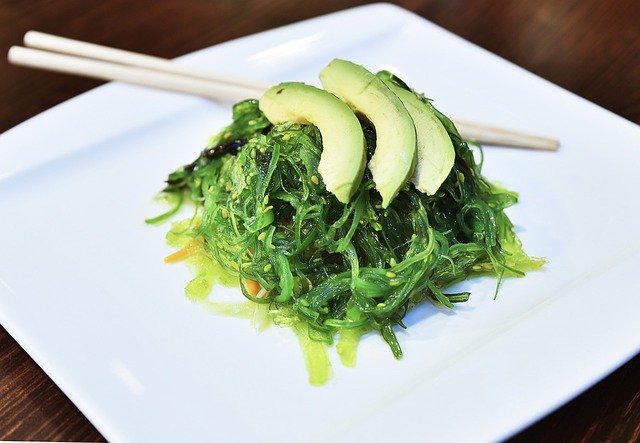 How Much Iodine do the Japanese Consume?

The first issue I want to briefly clear up is the false idea that the Japanese consume 13.8 mg of iodine per day from their diet. This is actually a mischaracterization of a single study by Nagataki et al that I will clarify. Here is what the literature shows:

Aceves et al state that, “This element (iodine) has been associated with the low incidence of benign and malignant breast disease in Japanese women (iodine average consumption in the Japanese population is 5,280 μg/day versus 166-209 μg/day in the UK and USA, respectively).” 5,280 ug/day equals 5.28 mg/day.

Cann et al agree in their paper stating, “Japan has a comparatively high iodine intake with an average urinary iodine concentration of 3400 μg/L (approximately 5,280 μg/day) as determined in a recent study of 4138 men and women in Sapporo, Japan.”

Tajiri et al state that, “…the average daily iodine intake was 1-5 mg in the remaining 10 patients, equivalent to the ordinary intake of normal Japanese.”

Kapil et al state, “Iodine Intake in Japan: Average daily intake of iodine in Japan has been reported to be 3000 micrograms, which is 20 times more than the RDA value of 150 mcg in India.”

According to a report on iodine from the FAO/WHO Expert Consultation on Human Vitamin and Mineral Requirements, the following is stated about the daily iodine intake in Japan: “The amount of iodine intake by the Japanese is in the range of 2-3 mg/day.”

And finally, let’s clarify the Nagataki study. Nagataki states, “…the dry weight of such food as ‘tangle’(Laminaria) contains 0.3% iodine…” “…the average daily intake of seaweed was 4.6 g (wet weight).”  The well-known doctors who make this claim of 13.8 mg made a major mathematical error. 0.3% of 4.6 g does in fact equal 13.8 mg, but they confused dry weight and wet weight. The issue is that the paper is referring to dry weight in the above quote but the second quote refers to wet weight.

A follow-up paper in 2008 by Nagataki further clarifies the question of how much iodine is ingested by the Japanese on a daily basis. In this paper, Nagataki states, “The average of dietary iodine intake due to the ingestion of seaweeds is 1.2 mg/day in Japan.”

Alan Gaby, MD, also picked up on this in an editorial from The Townsend Letter for Doctors and Patients entitled “Iodine: A lot to swallow,” states the following: “The idea that Japanese people consume 13.8 mg of iodine per day appears to have arisen from a misinterpretation of a 1967 paper. In that paper, the average intake of seaweed in Japan was listed as 4.6 g (4,600 mg) per day, and seaweed was said to contained 0.3% iodine. The figure of 13.8 mg comes from multiplying 4,600 mg by 0.003. However, the 4.6 g of seaweed consumed per day was expressed as wet weight, whereas the 0.3%-iodine figure was based on dry weight. Since many vegetables contain at least 90% water, 13.8 mg per day is a significant overestimate of iodine intake.”

Does Iodine Cause Hashimoto’s Disease or Make it Worse?

Let’s begin to dig into the research to answer this question.

Konno et al in 1994 evaluated thyroid health by measuring TSH and thyroid autoantibodies in 1061 adults living in five coastal areas of Japan. Konno et al state, “These results indicated that 1) the prevalence of hypothyroidism in iodine sufficient areas may be associated with the amount of iodine ingested; 2) hypothyroidism is more prevalent and marked in subjects consuming further excessive amounts of iodine, and 3) excessive intake of iodine should be considered an etiology of hypothyroidism in addition to chronic thyroiditis in these areas.”

And in a previous paper in 1993, Konno et al analyzed 4110 apparently healthy people (2931 men and 1179 women) for thyroid dysfunction via evaluation of serum TSH, thyroid autoantibodies, and urinary iodine. All resided in the city of Sapporo, a city in northern Japan where iodine intake is high. The authors state: “The prevalence of unsuspected hyperthyroidism as defined by suppressed TSH values was 0.61%, of which 64% was diagnosed as Graves’ disease based on positive thyrotrophin receptor antibody results. The prevalence of unsuspected hypothyroidism, as evidence by supernormal TSH, was 0.68% for males and 3.13% for females with an age-related increase. Of those with hypothyroidism, 45.5% were autoantibody positive.”

The above study also required the subjects to restrict their iodine intake and made the following conclusions:

“When iodine intake was restricted for 6-8 weeks for hypothyroid subjects, the elevated TSH and thyroglobulin and low free T4 levels were reversed in the autoantibody negative but not in the positive group.” “This study provides further information on the prevalence of thyroid dysfunction and autoimmune thyroid diseases in an iodine sufficient area. In addition, it suggests that more than half of the patients with unsuspected hypothyroidism were negative for autoantibodies and that the excessive iodine intake may be involved in causing latent hypothyroidism.”

Now let’s examine some research on the connection between the addition of iodine to the food supply to eliminate iodine deficiency and how this impacts the prevalence Hashimoto’s disease.

Zois et al has published two papers on iodination of the food supply in Greece. In the first paper, Zois et al conclude, “In conclusion, silent iodine prophylaxis has resulted in the elimination of iodine deficiency in Greece, and this has been accompanied by an increase in the prevalence of autoimmune thyroiditis.”

In conclusion, “Thus, after the elimination of iodine deficiency of northwestern Greece, the development of autoimmune thyroiditis appears to be a persistent and progressive phenomenon.”

“In conclusion, iodine supplementation in Turkey has resulted in the elimination of iodine deficiency in the Eastern Black Sea Region, and this has been accompanied by an increase in the prevalence of autoimmune thyroiditis and thyroid dysfunction.”

Gaberscek et al studied the effects of iodine fortification of table salt from 1953 to 2009 in Slovenia and found that the incidence of Hashimoto’s thyroiditis more than doubled after iodine was added to table salt.

Camargo et al studied the effects of excessive iodine fortification in a population in Sao Paulo, Brazil from 1998 to 2003. Table salt in Brazil was increased to 40-100mg/kg iodine concentration for this five-year period and the prevalence of chronic autoimmune thyroiditis was analyzed.

TSH, Free T4, thyroid peroxidase antibodies (anti-TOP), urinary iodine concentration, and thyroid volume were measured through ultrasound. The authors found that the rate of chronic autoimmune thyroiditis was 16.9% compared to a previous rate of 9.4% in 1994 based on a study finding by Tomimori et al. Brazil decreased the salt iodine content to 20-60mg/kg based on these findings.

The authors conclude, “Five years of excessive iodine intake by the Brazilian population may have increased the prevalence of chronic autoimmune thyroiditis and hypothyroidism in subjects genetically predisposed to thyroid autoimmune diseases. Appropriate screening for early detection of thyroid dysfunction may be considered during excessive nutritional iodine intake.”

Does this mean that iodine fortification should be avoided? Papanastasiou et al do not believe so in their paper “Thyroid autoimmunity in the current iodine environment.” The benefits of correcting iodine deficiency outweigh the risks from a large population perspective. They state: “It seems that both iodine deficiency and iodine excess should be avoided because of increased morbidity that might be induced. Iodine prophylaxis and treatment programs remain even nowadays important for iodine deficiency correction, but follow-up over time and continuous control of iodine intake must be sustained. Although iodine-induced thyroid autoimmunity in the current iodine-sufficient environment is of scientific interest, it seems that it is a transient and/or subclinical phenomenon. Thus, the suspicion for increased prevalence of iodine-induced thyroiditis in previously iodine-deficient areas should not be held, in any case, as an argument against the…iodine supplementation of these areas.”

Things change though since we as clinicians cannot afford to have even a single patient have an adverse event from iodine supplementation so there is more to this story on an individual basis in those with Hashimoto’s disease.

How do we as clinicians determine whether or not it is safe to use iodine supplementation in our patients?

A study by Kostic et al may provide some answers to this question. The researches added either potassium iodide alone or in combination with the inflammatory cytokine interferon-gamma to human thyroid cells. They measured thyroglobulin and an inflammatory marker called ICAM-1.

They found that the combination of iodide with interferon-gamma resulted in a much greater inflammatory response in thyroid cells and a decrease in thyroglobulin than just iodide alone. Basically, this means that if a patient has excessive inflammation the inflammatory effects of iodide on thyroid cells will be amplified. This would result in increased thyroid antibody levels and greater damage to the thyroid gland as well as hypothyroidism.

The key point here is that you should work with a functional medicine practitioner who can help you identify all the underlying causes of inflammation and get it under control before considering iodine supplementation if you have Hashimoto’s disease. If you’re inflammed as noted in the above study, iodine supplementation will increase inflammation in the thyroid gland, increase thyroid antibodies, and suppress thyroid function resulting in hypothyroidism.

What are common causes of inflammation in Hashimoto’s disease?

Food sensitivities such as gluten and dairy products.

Micronutrient deficiencies such as vitamin D, selenium, and zinc.

1. Do not increase consumption of iodine-rich foods or supplement with iodine until you have identified all sources of inflammation in your body and corrected the inflammation. As noted in the above Kostic et al study, if you have inflammation then you are at greater risk for increasing your antibody levels which may increase destruction of thyroid tissue.

2. Once you have your Hashimoto’s disease and inflammation under control, you can then consider increasing your consumption of iodine-rich foods or taking a supplement with 150-250mcg of iodine.

3. You can identify iodine deficiency in your diet by logging your food with the free website and app Cronometer. Iodine deficiency will cause hypothyroidism and other health issues so as with any micronutrient, you don’t want too much or too little. Your thyroid and your body need iodine so don’t starve it of iodine.

4. Do not supplement with iodine if you have a hot nodule on your thyroid gland which can be identified through a thyroid ultrasound. Taking iodine with a hot nodule increases your risk of a thyroid storm which requires a visit to the emergency room and can potentially lead to death.

5. Make sure you are thoroughly evaluated by a healthcare practitioner before supplementing with iodine. I have seen hundreds of patients over the last 15 years come in with iodine-induced Hashimoto’s disease and hypothyroidism because the patient read on the internet that they should take high doses of iodine.

"I feel so blessed to have Dr. Hedberg as my doctor. We are systematically turning around all my health concerns.”